By 1972, the NBFPC, in conjunction with private woodlot owners and producers in the province, approved plebiscite procedures necessary to establish forest products marketing boards. 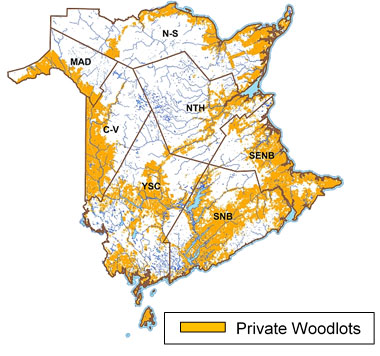 At the time of establishment one of the original tasks of the NBFPC was to encourage and facilitate the achievement of expanding markets and equitable prices for both the producer and the consumer of primary forest products. In an effort to achieve this, the Commission actively participated in the negotiation processes between mills and marketing boards.  In 1982 a regulation and in 2005 an Order of the NBFPC was established which sets out the criteria for boards and industries negotiating agencies. Thus, this activity is now the responsibility of the individual boards and companies and is monitored by the Commission.

We will create a sustainable framework to assist New Brunswick forest sector stakeholders to achieve the optimum utilization of private woodlot resources.

Through its legislated objectives, duties and powers, the Commission will effectively contribute to the economic, social and environmental benefits of the New Brunswick forest products sector by:

Providing a leadership role by working with all stakeholders.

Expanding and strengthening services and support to all stakeholders.

Ensuring the New Brunswick Forest Products Marketing Board system is effective and sustainable.

The NBFPC generally meets on a monthly basis and more often when necessary.

An Executive Director manages the Commission’s daily business affairs with the help of Commission employees.

The NBFPC receives its funding from NRED.

Brent resides in Rothesay and is a graduate of the University of New Brunswick with a Bachelor of Science in Forest Management in 1983.  He has worked in the forest industry with J.D. Irving, Limited for more than 37 years in various capacities.  Since 2004, he has been Process Owner / Director of Wood Procurement and Measurement, responsible for wood purchasing and woodlot services (stumpage purchase) programs for JDI mills in New Brunswick, Nova Scotia, and Maine.  These responsibilities also include wood measurement of wood products across all JDI mill sites.

Mike resides in Fredericton and is a graduate of Mount Allison University in 1988. He has worked in various aspects of the forest industry in New Brunswick and Nova Scotia for over 20 years. He is currently Director of Government Relations and Communications for AV Group.  He previously held the position of Executive Director with ForestNB from 2014 to March 2021.

Mario resides in the Chaleur region and is retired after an over 30-year career in the Canadian Air Force.  He spends his retirement time working on his woodlot. Since 2014, he has also served as Chairman of the North Shore Forest Products Marketing Board and he is also currently a member of the Beresford Local Service District Advisory Committee.

Maurice resides in Fredericton. He attended St. Thomas University, University of Moncton and the University of Toronto Insurance Institute. He is a former member of Parliament-House of Commons and has been a member and/or chairman of a multitude of federal and provincial committees.

Carol resides in the Mactaquac area and works for the Department of Agriculture and Aquaculture. She is a Chartered Professional Accountant (CPA) and was Controller of various companies in Saint John before joining the NB Department of Economic Development in 2009. While working in Economic Development, she assisted several small businesses with their expansion plans. She has since worked within various departments including Crown Lands with Strategic Plans to grow New Brunswick’s economy.

Tim resides in Hawkshaw and is a 1990 graduate of the Maritime Forest Ranger School.  He has been employed in this position since February 2013.  Before his employment with the Commission, he was employed as General Manager of the Carleton-Victoria Forest Products Marketing Board for 12 years.  During that time, he was appointed twice as a member of the Commission representing producers.  Prior to his time with the Marketing Board, he was employed by a former Crown Licensee in various forest management roles.  He also currently serves as a volunteer member of the advisory board for the Dumfries Local Service District.

Kevin resides in Fredericton and holds a Master of Business Administration from the University of New Brunswick.  Experienced in both the private and public sectors, Kevin is now in his second tenure with the Commission.

Chris resides in Fredericton and graduated from Atlantic Business College in 1994. He has been employed with the Commission since March 2002 in an administrative support role for most of that time but has been in the position of Regulations Analyst since 2020. Before being employed at the Commission, he worked in various government departments.

Rebecca holds a Master of Science in Aquatic Ecotoxicology from University of Manitoba and undergraduate degree in Environmental Sustainability from Dalhousie University.  She currently resides in Fredericton and has been in this position since September 2021.  Before being employed at the Commission, she worked in the aquaculture and marine science research industry in Charlotte County.